Yes, it’s that time of (two) year(s) again, the time when the world rejoices in peace and harmony, celebrating the human spirit with the grandest of all athletic competitions.  Or something like that.

Yes, it’s the Olympics.  When for two weeks I become a fanatic about badminton and speed track cycling and water polo and weight lifting and equestrian.  When we get moments like Jason Lezak’s swim on the last leg of the 4×100 Freestyle relay at the 2008 games — one of the greatest sporting events I’ve ever seen (check out Bud Greenspan’s terrific segment on it here).

Here is the famous photo of Phelps celebrating after that relay win, plus the full squad below (Lezak is on the far right): 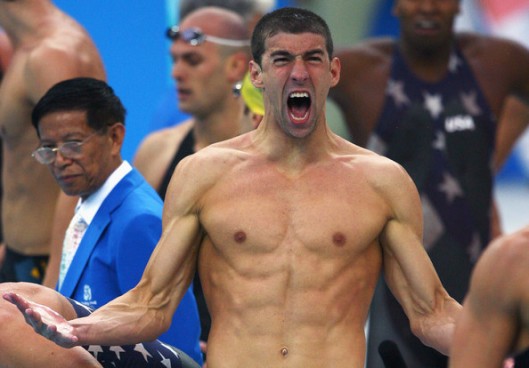 Even though the opening ceremonies aren’t until Friday, competition in the 2012 London games began today.

Which leads me to a fascinating article I’ve been saving from last month in the Washington Post called “Michael Phelps has mastered the psychology of speed“.  I think the title is a misnomer — it’s really about the mental components that any high performing athlete (or any high performer generally) draw upon in competitive situations to handle incredible amounts of pressure.

Here’s a feel for what the athletes face:  “‘The pressure at the Olympic Games is really, really, really overwhelming, even if you are incredibly experienced,’ said Natalie Coughlin, a two-time Olympian who has won 11 Olympic medals. ‘The feeling of walking onto the pool deck, standing behind the blocks knowing the race that you’ve prepared for the last four years, or the past decade, [that] everything is going to culminate in that 58 seconds or so, it’s quite stressful.'”

Those who excel in these conditions typically have one of two mental aptitudes:

1) Offensive: “An unyielding desire for victory and superiority… This allows an athlete to use the energy surges or adrenaline produced from high-pressure situations to enhance concentration, strength and execution — rather than to produce nervousness, panic, muscle tightening or over-exertion.”

2) Defensive: “A resilience that allows an athlete to roll with unforeseen circumstances such as a bad lane assignment, [or] a poor night’s sleep.”

While it may be that some people have Offensive and/or Defensive aptitudes in abundance compared to everyone else, I do think both are skills that each of us can develop with practice in order to address pressures in our lives.  We may never reach Olympian levels, but we can definitely improve — and my guess is that learning a Defensive aptitude (i.e. resilience) is easier.  Let me know if you agree/disagree.